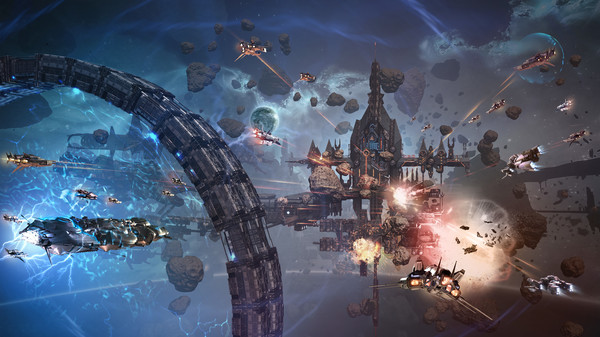 An unofficial PPA is available for Ubuntu. Run the following commands to add PPA and install Ubuntu:

This is also available in Steam.

5. Dota 2:- Probably this is the most played game on steam. Dota 2 is a multi-player cross-platform real-time strategy game.

6. SuperTuxKart:- SuperTuxKart is a 3D open-source arcade racing game that is integrated with more than 20 race tracks and 6 game-play modes are available for users.

8. Insurgency:- Insurgency is another entertaining  First-Person Shooter action (FPS) game. You can play with more than 40 weapons with 7 multiplayer game modes. It can support up to 32 players.

10. Football Manager 2019:- For football lovers, this game is for you. Football manager 2019 includes clubs from over 50 countries worldwide.

11. Shadow Tactics: Blades of the Shogun:-  Shadow Tactics is a hardcore tactical stealth game. It is set in Japan around the Edo period. A new Shogun seizes power over Japan and enforces nationwide peace. In his battle against conspiracy and rebellion, he recruits five specialists with extraordinary skills for assassination, sabotage, and espionage.

13. Kith:- Kith is free regular mini-adventure series, set on a planet covered in fractured plateaus above a dark and ominous mist.

Download Kith
14. Onraid:- Onraid is a free Linux game. It is a 2D scrolling shooter game that looks like a popular Contra series game. It features single-player, MMO, online co-op, local multiplayer, and online multiplayer game modes.
Onraid Steam
15. Unturned:- Unturned is a free-to-play survival game. It is developed by Smartly Dressed Games.
Unturned Steam
16. Team Fortress 2:- It is considered one of the oldest multiplayer shooter games for Linux. It is even in the list of the top 10 steam games being played on a daily basis.
Fortress 2
17. Star Conflict:- Star Conflict is an action-driven space simulation game. It is a multiplayer game with both PVP and PVE.

Star Conflict
18. Brain Out:-  Brain Out is a 2D multiplayer shooter. It has a post-soviet setting.

Brain Out
19. Shadow Blade:- Shadow Blade is an action-platformed set in a visually striking world where the ancient teachings of ninjas and samurai clash upon a modern landscape. It is a cool ninja-themed game.
Shadow Steam
20. WAKFU:-WAKFU is a grid-based MMORPG game. If you are an anime fan then this game is for you.

WAKFU Steam
21. Fishing Plant: Fishing Plant is an online first-person multiplayer fishing simulator.
Fishing Steam
22. Adventure Capitalist:- This is a funny name and an interesting game. It’s all about attracting investors to your project.
Adventure Capitalist Steam
23. No Room In Hell:- No Room In Hell is an action-packed game. It is a first-person co-op zombie shooter game.
No Room In Hell
24. Cognizer:- Cognizer is a Linux puzzle game. It is a unique brain-challenge with symbols and colors.
Cognizer Steam
25. Faeria:- If you love card-based games then this game is for you. Faeria is a must-try Linux card game.
Faeria Steam
26. Tank Force:- Tank Force is an online tank shooter game. It is a cross-platform game available in multiple operating systems.
Tank Force Steam
27. The King’s Request:-  If you are studying Physiology or Anatomy or interested in the human body, science, biology, medicine, bio-medicine, biomedical science, nursing, pharmacy, health or exercise science? This short adventure game is for you. It will help you work through questions surrounding some of the major concepts in physiology, anatomy, and the study of the human body.
The King’s Request Steam
28. Forge Of Gods:- Forge of Gods is a multiplayer card strategy game.
Forge of Gods Steam
29. The Pirate: Caribbean Hunt:- It’s a battle to become captain of the ship. Though it sounds like Pirates of the Caribbean movies, it is not associated with the movie.
The Pirate: Caribbean Hunt Steam
30. CAYNE:- CAYNE is a free point-n-click horror adventure game. It is an isometric adventure game with a modern edge. It is available via GOG.com
Download CAYNE
31. Hedgewars:- Hedgewars is a funny game to play. You will play the game with pink hedgehogs.
Download Hedgewars
32. Warsow:- Warsow is a completely free fast-paced first-person shooter (FPS) for Windows, Linux, and macOS. They have a discord server too.
Download Warsow
33. 0 A.D.:- 0 A.D. pronounced “zero ey-dee” is a free real-time strategy (RTS) game. It is a free and open-source real-time strategy game that is also available for Linux users.
Download 0 A.D.