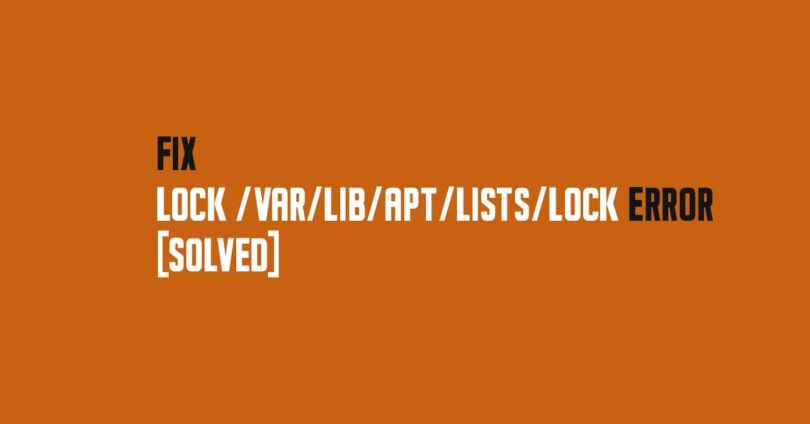 Ubuntu is one of the most popular and widely used Linux-based operating systems. It is often considered the most preferred operating system among first-time users. In this particular post, we are going to show you the steps to solve the issue “Lock /var/lib/apt/lists/lock Error” while using Ubuntu. It is really frustrating sometimes when you are doing something and you are stuck.

In Ubuntu, while installing an application or updating the repository we might come across the  /var/lib/apt/lists/lock error after executing the apt command.

At first, You Need To Locate The Lock Directory

In simple terms, the director has been locked or the Debian package is not available in the system. Or the apt lock list that is placed in the var directory is unavailable. It’s like removing your USB drive while copying files. This error appears when you remove a directory or repository from the Ubuntu filesystem when that file is in use.

Most often, the issue gets resolved with a simple reboot. However, if you can’t solve the issue with a restart then run the following commands to fix Lock /var/lib/apt/lists/lock error.

Run the rm command with root access to remove the apt lock lists at first.

Now, remove the dpkg lock file from the library.

Now, remove the cache file of apt archives with the following command.

At this stage, you might have found the solution for the problem and have a smooth process of installing the packages on Ubuntu.  You just need to be calm while using Linux-based systems as it is all about learning and fixing the problem and contributing to the community.