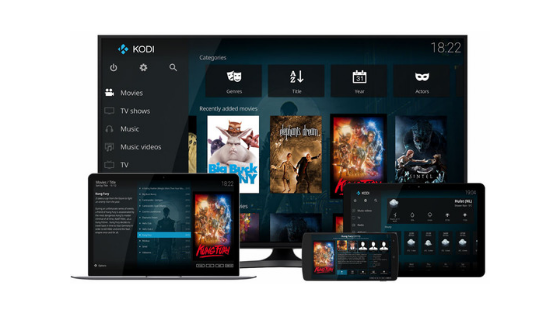 There is no doubt that Linux is multi-purpose operating system. It has gone far from being the operating system for system administrators or for programmers. You can use it for any purpose.

In this post, We will talk about some of the best Media server software for Linux so that you can turn your Linux into a media server instantly.

We are starting with Plex. Plex is popular Media server software for Linux. It is also available for other operating systems making it cross-platform media server software. Tidal, a popular music streaming service is also integrated with the Plex server.

Download the .deb file from the official link and install it on your Linux.

How to install Kodi in Ubuntu

For other Linux operating systems, download the Kodi from below.

Gerbera is another simple media server tool that can be used to stream services using your local network resources. It has also an optional transcoding support feature that can convert your media to a format supported by your devices.

MythTV is a free and open-source media server software. It is also cross-platform software. According to the company’s official website, They would like to say it as an alternative to Windows Media Center or Tivo. You can also watch and record analog and/or digital TV, including HDTV, Pause, skip, and rewind live TV shows, Parental controls to keep your kids out of the good shows, and many more.

It is an open-source and free media server software and is a fork of Emby media server. It has no built-in tracking, and no central servers collecting your data.

Subsonic is a feature-rich media server software. It has tried to secure the connection with the use of HTTPS/SSL encryption for ultimate protection.

Serviio is a free and cross-platform media server software. It is based on Java technology. It can stream audio, video (SD & HD), and image files in their native format or transcoded in real-time, supports RAW camera images, supports automatic renderer detection and per-IP profile assignment, and many more.

OpenFLIXR Media Server is an all-in-one media server. It supports an automated downloading facility. It is also integrated with the Plex media server.

Madsonic is a popular media server software. It is a web-based media library and media streamer with jukebox functionality. You can even make your own add-ons or scripts with Madsonic’s API.

MediaPortal is a simple media server software. You can play videos, movies, DVDs, and Blu-ray discs, Listen to music and radio, Stream media, radio, and TV to any HTPC / PC connected to your network, and many more.

Emby is a powerful and advanced Media server software. It can automatically convert and stream your personal media play on any device. It even syncs your personal media to smartphones and tablets for easy offline access. For parents, It has also feature like creating access schedules, time limits, and more.

OSMC is a free and open source media center built for the people, by the people.

Red5 media server is also an open-source and free-to-use media center server software. According to the company’s website, Red5 has been and is being used by thousands of companies from Amazon to Facebook. Red5 can be used for Live streaming purposes too.