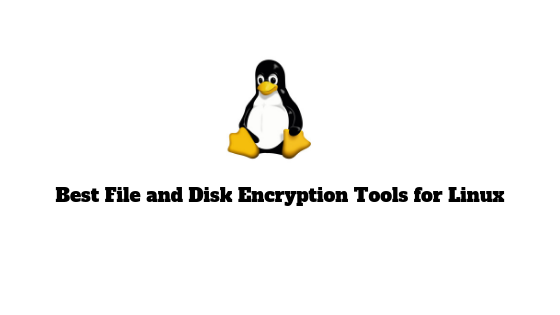 Insight: List of Best File and Disk Encryption Tools for Linux In 2021.

Let’s have a look into a list of best file and disk encryption tools for Linux based operating systems.

Cryptmount is a utility for GNU/Linux operating systems. It is an open-source tool that allows an ordinary user to mount an encrypted filing system without requiring superuser privileges. It is aimed at Linux systems using the 2.6 kernel series or later.

CryFS is a cloud-based encryption tool. It is also an open-source encryption tool which encrypts your files, so you can safely store them anywhere. It works flawlessly with cloud services like Dropbox, iCloud, OneDrive and others.

Tomb is free and open-source system for file encryption on GNU/Linux. It create secure backups of secret or personal files in encrypted, password-protected directories called tombs which can be opened only using their associated key files and passwords.

EncFS is a free tool which is basically used to mount EncFS folders on Linux, Windows, and OS X. It can create, edit, export, and change the password of EncFS folders.

Cryptsetup is an open-source disk encryption tool. It is used to conveniently setup dm-crypt managed device-mapper mappings. It setup cryptographic volumes for dm-crypt including LUKS extension.

Dm-crypt is a transparent disk encryption subsystem in Linux kernel versions 2.6 and later and in DragonFly BSD. It is part of the device-mapper infrastructure and uses cryptographic routines from the kernel’s Crypto API.

Ecryptfs is an enterprise cryptographic filesystem for Linux based operating systems. It stores cryptographic metadata in the header of each file so that encrypted files can be copied between hosts. The file will be decrypted with the proper key in the Linux kernel keyring.

VeraCrypt is an open-source and free disk encryption software for Linux, Windows, and Mac OSX. It is based on TrueCrypt 7.1a. It can creates a virtual encrypted disk within a file and mounts it as a real disk and also can encrypt an entire partition or storage device such as a USB flash drive or hard drive.

GnuPG or the GNU privacy guard is a collection of crypto tools that allows you to encrypt and sign your data and communications.