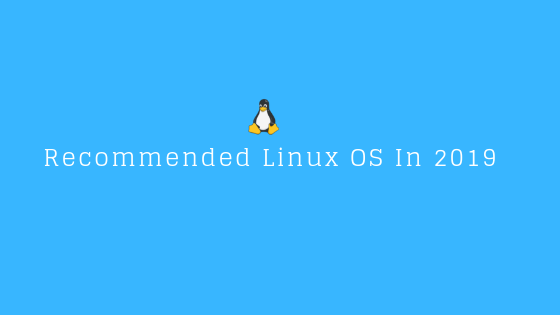 In this post, We are going to write about various recommended Linux OS in 2019.

Let’s start with the best Linux distros for the beginner or let’s say easy to use Linux distros in 2019. In this categories, We thought to put Ubuntu,  Linux Mint, Elementary OS, Manjaro Linux and Zorin OS.

Ubuntu:- Ubuntu is no doubt the most popular and easy to use Linux operating system. We personally recommend you to use Ubuntu if you are switching from Windows and using Linux for the first time. Wide range of softwares or applications are also available for Ubuntu operating system.

Manjaro:- Easy to use and user friendly Manjaro is based on Arch Linux operating system. Despite of being based on complex and hard to use Arch Linux, Manjaro is easy to use Linux operating system which can be handy for the users who are using Linux for the first time. Manjaro also have own software repository from where you can get latest version of various softwares.

Zorin OS:- How can we miss Zorin OS in this list. Zorin OS is also based on Ubuntu operating system. Wine and PlayOnLinux comes preinstalled. It is also loaded with ‘Zorin look changer’ through which you can customize it and make it look like Windows so that you might feel easy to migrate to Linux  from Windows.

Let’s check some of the Linux operating systems which can run on minimum hardware configurations.

Peppermint:- It is based on Ubuntu and can run on minimum hardware configurations. Peppermint uses LXDE desktop environment. It can easily run on the computer or laptop having any processor based on Intel x86 architecture with at least 3.6GB Disk Space and 512MB RAM (1GB recommended).

KNOPPIX:- KNOPPIX is another lightweight Linux operating system. It is based on debian and can run on minimum hardware. It is designed to be run directly from a Live CD or a USB flash drive. It can run on system having Intel/AMD-compatible CPU (i486 and up), Standard SVGA-compatible graphics chipset, 2GB Disk Space and at least 120MB RAM.

Lubuntu:- Let’s say Lubuntu is the lighter version of Ubuntu. It is very light Linux operating system which can be useful to use on Old PCs. It runs on LXDE desktop environment and is official flavors of Ubuntu. It can easily run on system having:

Linux Lite:- Linux Lite like it’s name, is a lightweight Linux operating system. Linux Lite is based on Ubuntu LTS. It comes with number of various preinstalled applications. It can run on very low spec system. Minimum hardware requirements for the Linux Lite:

LXLE:- LXLE is a re-spin version of another lightweight Linux Lubuntu. It has beautiful easy to use user interface. Minimum hardware requirement for LXLE:

There are also other lightweight Linux operating systems available in the market. Some of them are Puppy Linux, antiX Linux,  Sparky Linux, Bodhi Linux.

Linux is the king of server. Due to it’s wide range of advanced features and high security, It is leader in the server segments.

CentOS (Community OS) Linux Server:- How can we miss CentOS in this list. CentOS is a popular and stable Server operating system which is  derivative of Red Hat Enterprise Linux (RHEL). If you want to experience the service and feature of RHEL without paying for it then you have to use CentOS.

Oracle Linux:- Oracle Linux is a free and open source Linux server side operating system. It is developed by Oracle. It is basically focused on open cloud. It runs on all x86-based Oracle system. Oracle Linux is best for datacenters.

We are regularly updating this post. Let us know if you want us to write on specific list of operating system.