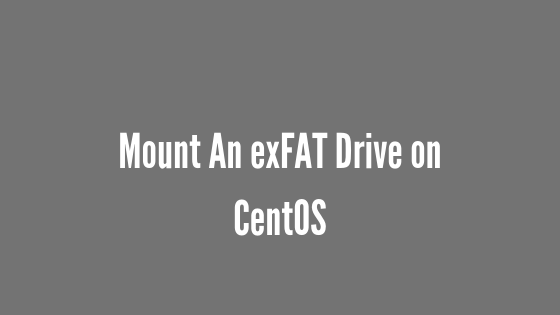 Insight: How To Mount An exFAT Drive on CentOS

exFAT or Extended File Allocation Table is a proprietary Microsoft file system which is basically used in SD cards and flash drives. Meanwhile, there is no support for the exFAT file system in CentOS.
In this tutorial post, we will show you the basic steps to mount an exFAT drive on CentOS.

Mount An exFAT Drive on CentOS

Let’s enable exFAT support on CentOS operating system. You need to have exFAT packages in your system so that you can use an exFAT drive.

Sadly, exFAT packages are not available in CentOS 7 repositories. You need to have exfat-fuse and exfat-utils installed in the CentOS operating system to use the exFAT drive.

There is basically two methods to install required packages. One of them is to build the exFAT packages from source and another one is to install it from the Nux dextop repository. We will use Nux repo in this tutorial.

Now, run the following command to import the repository GPG key at first and then enable the Nux repository:

Now, you can mount an exFAT device easily.